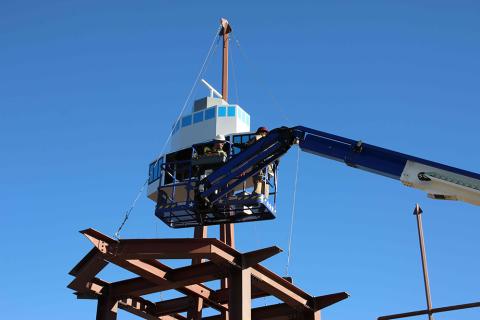 The USS Colorado was a World War II-era battleship and the first of her battleship class—the Colorado Class. She served her country from August 1923 to January 1947, mostly in the Pacific Theater. The ship’s likeness will stand vigil on the shore of Mann-Nyholt Lake and serve as a memorial to all veterans—reminding visitors to appreciate the sacrifices made by veterans past, present, and future who protect and serve our great nation.

“The county’s hope is that the memorial will also be used as a place where families can keep our country’s history alive. By having a space dedicated to veterans’ service to our nation, multiple generations can gather to tell their own stories of serving in the military and reflect on the wars and battles that have given us the liberties we enjoy today,” said Adams County Commissioner Chair Lynn Baca.

In honor of the memorial’s namesake, Adams County celebrated the occasion on Pearl Harbor Remembrance Day by marking the “stepping of the mast,” when the shell truly becomes a ship - and was joined by Command Master Chief Benjamin Chester and active-duty sailors. It’s fitting that 81 years after the devastating attack on Pearl Harbor, a new World War II-era replica ship takes shape. Watch our recap video of the ceremony.

“The purpose of this project is to provide a space that not only honors living military members – both active and retired – but also recognizes our nation’s heroes who made the ultimate sacrifice,” said County Commissioner Chaz Tedesco.

Mast stepping ceremonies have long been tradition in shipbuilding, and typically involve welding coins or significant items to the mast. These items are believed to bring good luck to the vessel and serve as a time capsule aboard the ship. In following tradition, Adams County placed a letter of support signed by elected officials and municipalities in the mast of the memorial. Senator Dominick Moreno, Senator Faith Winter, Senator Kevin Priola, State Representative Dafna Michaelson Jenet, State Representative Yadira Caraveo, State Representative Shannon Bird, and State Representative Kyle Mullica were all co-signers.

The memorial is expected to be completed by Spring 2023.