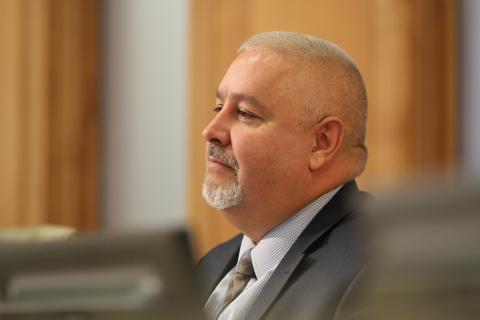 Adams County Commissioner Charles “Chaz” Tedesco has been named Chair of the Board of Directors of the Urban Drainage and Flood Control District (UDFCD).

Tedesco has served on UDFCD’s board for five years, including as Vice Chair in 2017. The UDFCD board is comprised of local mayors, commissioners, city council members, and engineers.

“I am very proud to have been elected by my peers to chair such a prestigious board. The unanimous bipartisan vote of confidence means more than I can express,” said Tedesco. “Safety, high standards, and quality of work have been at the forefront of every decision this board makes. This position offers a unique ability to work in partnership across the region benefiting not only Adams County but the entire region addressing stormwater, drainage, and flood control.”

Commissioner Tedesco is a veteran of the Navy who has supported the expansion of worker and environmental protections and job training, while improving the lives of workers through education.  Tedesco was elected to represent District 2 as Adams County Commissioner in November 2012 and was sworn into office on Jan. 8, 2013. He has been married to Bernadette Padilla since 1996, and they have a daughter, Amber.

Established in 1969 by the Colorado legislature, UDFCD assists local governments in the Denver metro area with drainage and flood-control issues. UDFCD includes Denver, parts of the six surrounding counties, and all or parts of 33 incorporated cities and towns, covering a population of about 2.8 million. Learn more at udfcd.org.