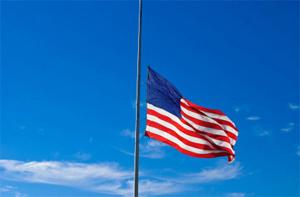 Gov. John Hickenlooper today ordered flags be lowered to half-staff on Wednesday, Feb. 22, on all public buildings statewide in honor of former Colorado Lt. Gov. Mark Hogan, who died last week. Flags should be lowered from sunrise to sunset.

Hogan died on Feb. 12 of natural causes. He was 86 years-old. He is survived by his wife, Linda; five children, a stepdaugher; and 16 grandchildren. His funeral was held Feb. 17 in Greenwood Village. Hogan served as Lt. Gov. from 1967-1971 under Gov. John Love. He was elected twice to the Colorado House of Representatives. He also served as the chairman of the Colorado Democratic Party in 1979 and 1980. He was a real estate agent and developer.